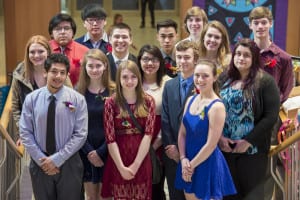 The 2015 Spirit of Youth Award Recipients

Each year, Spirit of Youth recognizes teens from communities across the state by soliciting nominations from caring community members, and partners with school boards to conduct local recognition events. These young people receive accolades for accomplishments that typically go unnoticed, including cultural pursuits, science and environmental activities, the arts, and outstanding service to the community.

The nomination and selection process culminates with the Spirit of Youth Awards, highlighting honorees as unsung heroes from communities across Alaska. The award ceremonies recognize the hard work and efforts of these future leaders, and the evening provides an opportunity to share their inspiring and often heart-warming stories with the community at large.

Additionally, Spirit of Youth Award recipients are highlighted on the Radio Stories series produced by our Alaska Teen Media Institute, aired on nearly every public radio station in Alaska, reaching nearly 100 communities and 94,000 listeners. These stories allow adults around the state to hear positive and accurate portrayals of teens today, countering negative stereotypes so often perpetuated by mainstream media. Since the Spirit of Youth Awards began 25 years ago, thousands of positive stories about Alaska youth have been shared through television, radio and local newspapers.

The Spirit of Youth Teen Advisory Council has created  eight categories for nominations and recognition. Council members use these definitions and the following criteria to evaluate each nomination:

The Humanitarian Award recognizes youth who have put forth efforts to make their community a better place or are active in local or state government. Previous nominees have contributed to political campaigns, been strong advocates for change, served on school boards and youth courts, or have organized fundraisers, designed playgrounds, repaired homes, and otherwise helped others in need.

The Innovator Award shines the spotlight on the efforts of youth who have shown excellence in the fields of math and science through research, study, technology for improvement in their community. Previous nominees include youth who studied DNA, created a community planet walk, participated in robotics programs, and conducted earthquake research.

The Lifesaver Award celebrates youth who have gone above and beyond “the call of duty” by preventing injuries and illness and saving lives. Previous nominees have shown courage by pulling hypothermic tourists out of a raging river, taught life-saving skills, conducted seat belt safety programs, worked toward suicide prevention, promoted mental health and wellness, and served as first responders.

The Phoenix Award celebrates youth who display exceptional determination and perseverance as they overcome significant life challenges. Previous nominees have blazed trails for adaptive sports and access, experienced significant loss and have helped others going through similar hardships, they have found ways around language or cultural barriers, and have assisted family members or the community address difficult circumstances.

The Visionary Award recognizes youth who have turned their creativity and knowledge into an entrepreneurial or economic venture. Previous nominees  have started their own non-profit organizations, raised significant funding for a cause, or even started their own for-profit businesses. Teens have owned coffee shops, starter a maker business, operated delivery services, and raised thousands of dollars for a community endeavor.

The Dreamer Award recognizes youth who are actively engaging in their community through the preservation of cultural practices and arts, those who share personal expression through visual or performing arts, and those who cultivate youth voice through media and digital art forms. Previous nominees include students who have worked on radio programs and local newspapers, organized musical ensembles, and taught Indigenous arts and dance.

Teens nominated for the Role Model Award lend a helping hand to peers and younger youth in their community. These teens can be outstanding leaders, peer counselors, or a positive influence in the classroom.  Previous nominees have included tutors, mentors, or instructors in a variety of fields. These teens build assets in themselves and among their friends.

The Discovery Award highlights accomplishments made by youth in science with a specific focus on the environment. Previous nominees include teens engaging in environmental advocacy, been involved in restoration and conservation projects, worked to address food security, invasive species eradication, and the reduction and removal of plastics from their schools and communities.